Gifts from my Grandmother 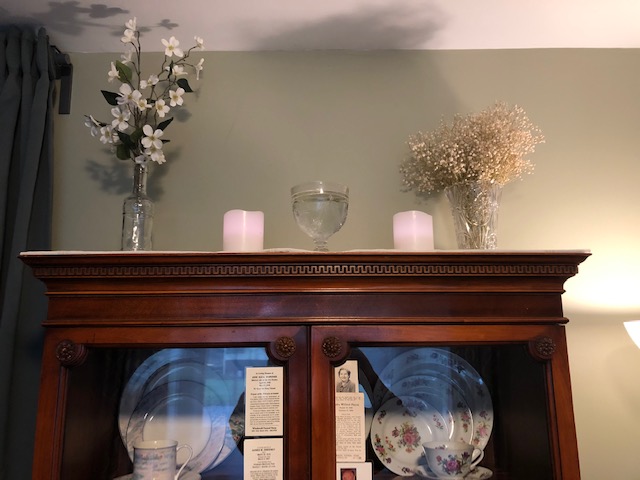 Most of us have gifts that we treasure from those who have died. Perhaps a memory that warms your heart, a picture that captures a joyful smile or a family recipe that fills your home with the scents of belonging. We can use these gifts to keep the memory of our loved ones alive and through that love keep their blessings with us. While not all of our memories of family are full of love, there are always ancestors who wish you to have a better life. By creating a memorial to those ancestors, sometimes called an ancestor altar, we provide a window for their love and blessings to shine through into our lives and homes.

In a hundred years, no one alive will have met you. And yet, there are people that you probably want passionately to live happy, prosperous and bountiful lives. You may not be able to think of them in any terms other than your children’s grandchildren or your cousins’ kids and yet the idea that the people you loved have passed on that love to others is precious. In the same vein, there are people who lived a hundred years ago who feel the same way about you. Of course there are ancestors that we have met, grandparents maybe even great grandparents. These people want for you all the love and success that they can give you. They may not understand how your definition of success differs from theirs and they still want you to prosper. They also want to be remembered. The best way to start is by setting up a space to honor the ancestors you knew. You might place a picture or make a cup of coffee the way they liked. In our wonderful modern world, I place an electric candle to light up that area of my home. A night light that guides my children’s steps through the dark and reminds me that my ancestors are always with me.

I am very lucky to have what some would call an ancestor altar that belonged to my grandmother. During her decades as a classroom teacher, Loretto Pierce taught thousands of Catholic children. She was “lace curtain Irish” by which I mean a proper school marm, as strict as any nun, who proudly filled her tiny house with nice quality items including a prized china cabinet. This china cabinet had glass doors on the breakfront and pieces of china from her mother and grandmother inside. When my Grandmother returned from a funeral, she would place the Funeral or Memorial card in the glass front. The cards were there to remind her pray for their souls and for her to feel closer to those who had passed. In January of 1966, when she returned from her husband’s funeral, she placed his Memorial card in the glass of that china cabinet. As I was growing up I would sometimes ask about the different mass cards she had placed up there. When it became too full she would tuck some in the drawers. Throughout my childhood she would tell me that as the oldest granddaughter, the china cabinet would someday be mine. Though she probably would never use these words to describe it, Loretto used this china cabinet as an ancestor altar. It was clearly a place of honor and remembrance for her beloved dead.

Loretto was my only grandparent who was alive to attend my wedding. She began to give me some of her china after I married and had my own home. Now I was the young teacher and wife who was filling a tiny home. About a year after I married, Loretto caught the flu and died within a few days. Eventually her china cabinet came to my house and I placed her Memorial card in the glass as she had done for so many other people. Although I never met my Grandfather, I am comforted by seeing their Funeral cards together. I also designated a tea cup from her set to be used only for the tea I made and set on the china cabinet for her. This woman gave me my first cup of tea. In the months after she died I would pour us each a cup of tea and sit by her china cabinet to talk with her. As my grief faded and life moved on, those cups of tea happened less often. For years, I would make her tea only on Mondays. Now I sit with her most mornings and ask her help before I begin my day. That china cabinet sits prominently in my office with her cup on the top shelf, a daily reminder of my spiritual inheritance.